RAGE 2 - The Cusp of Greatness

It was completely by chance that a couple of weeks ago I started a game that has long been on my to-play list: Mad Max, by Avalanche Studios. Mad Max had the makings of a great game, drawing in strings of vehicle combat, exploration, resource hunting and a well developed visual theme that could have caught the eye of anyone passingly familiar with the franchise. It was also a game that could have really justified an expansive open world with wacky, inventive hives of enemies or hidden relics of bygone days, all viewed from the old leather of Max's iconic cruiser.

Mad Max had plenty of promise, but just failed to stick the landing.

Unfortunately, Mad Max missed the mark fairly resoundingly. There was no unforgivable sin or glaring oversight, no single factor that dragged the game down; it just failed to float. With clunky brawler combat, frustratingly finicky controls and underwhelming vehicle mechanics, the game just wasn't as fun to play or easy to get sucked into as it should have been. For some of the same reasons, RAGE 2 feels very similar.

Let's deal with the positives first: id Software's handiwork shows though very strongly with a punchy, weighty combat system. The gunplay feels an awful lot DOOM (2016), which is a good thing, and the addition of the Ranger powers turns it up to twelve. Chaining up precision kills, weapon quick swaps and various ground-pounds and shatter abilities is immensely satisfying, making the meat of the game enjoyable and engaging. Despite many locations and encounters feeling like copy-paste jobs, the combat is so varied and free-form that taking out the exact same party of enemies could be a very different experience. It's full of flair and colour, sharpened by quick movement speed and short cooldowns, making combat a joyously gruesome adventure of destructive power. 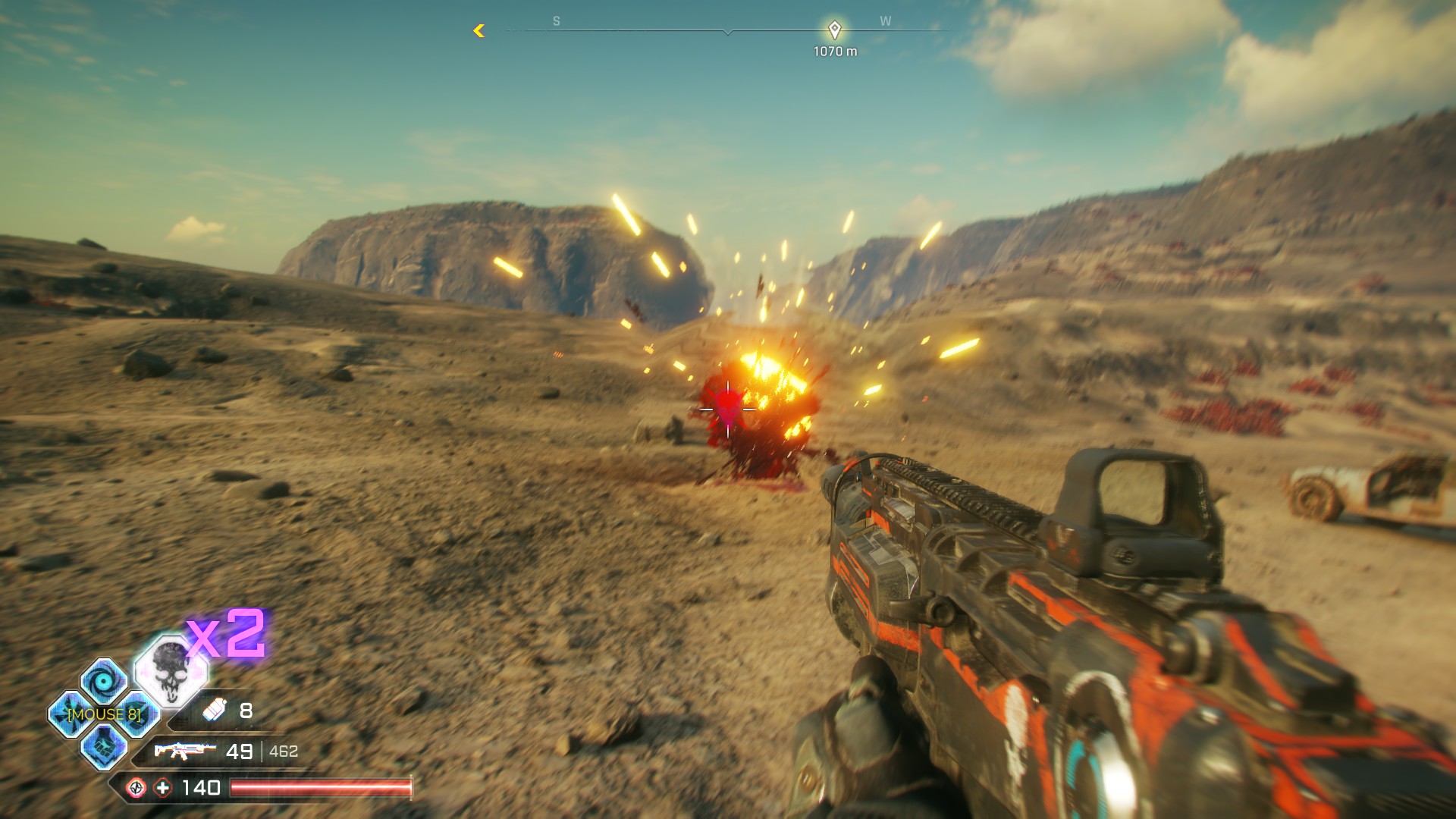 Lots of weapons and powers, each exciting and distinctive, make combat a delight (though it's tricky to capture in a screenshot!)

Another positive is something that bloomed at least to a small degree in Mad Max: an expansive upgrade system. There about half a dozen places to put your points - including but not limited to your vehicle, weapons, abilities and general skill tree - and several different currencies that span across and overlap different unlockables. For example, tiers of weapons and abilities are upgraded with Feltrite, but perks and add-ons within these tiers are upgraded with separate tokens. Your vehicle is upgraded with vehicle parts, your abilities with ability points (in turn rewarded by achieving targets for specific characters) and your base stats with combinations of items found in the wilderness or bought with the game's main currency. One may think that so many currencies and systems is unintuitive and clunky, but I don't think so: rather than being tied to one experience meter and a level system - the standard of most open world RPGs - the player has freedom to pursue the upgrades that match their play style and interests. It's designed in such a way that it feels like there's no need to grind because your upgrades are never tied to one action - it's quite liberating.

Unfortunately, that's about it for the good.

The biggest complaint I can see online about Rage 2 is about the open world: it's very boring. There are plenty of locations to complete dotted around, but they are very much alike and do not repopulate once cleared. This means that after completing a few objectives in one region it essentially dies, with only a few goons by the roadside and respawning vehicle convoys to keep you interested. All of this with a map which is actually a fair bit smaller than most modern open world games: driving from the very southernmost point to the absolute north took me less than six minutes in the standard vehicle. A small map isn't inherently a bad thing, but I think it's quite damning for such a small map to still feel boring. 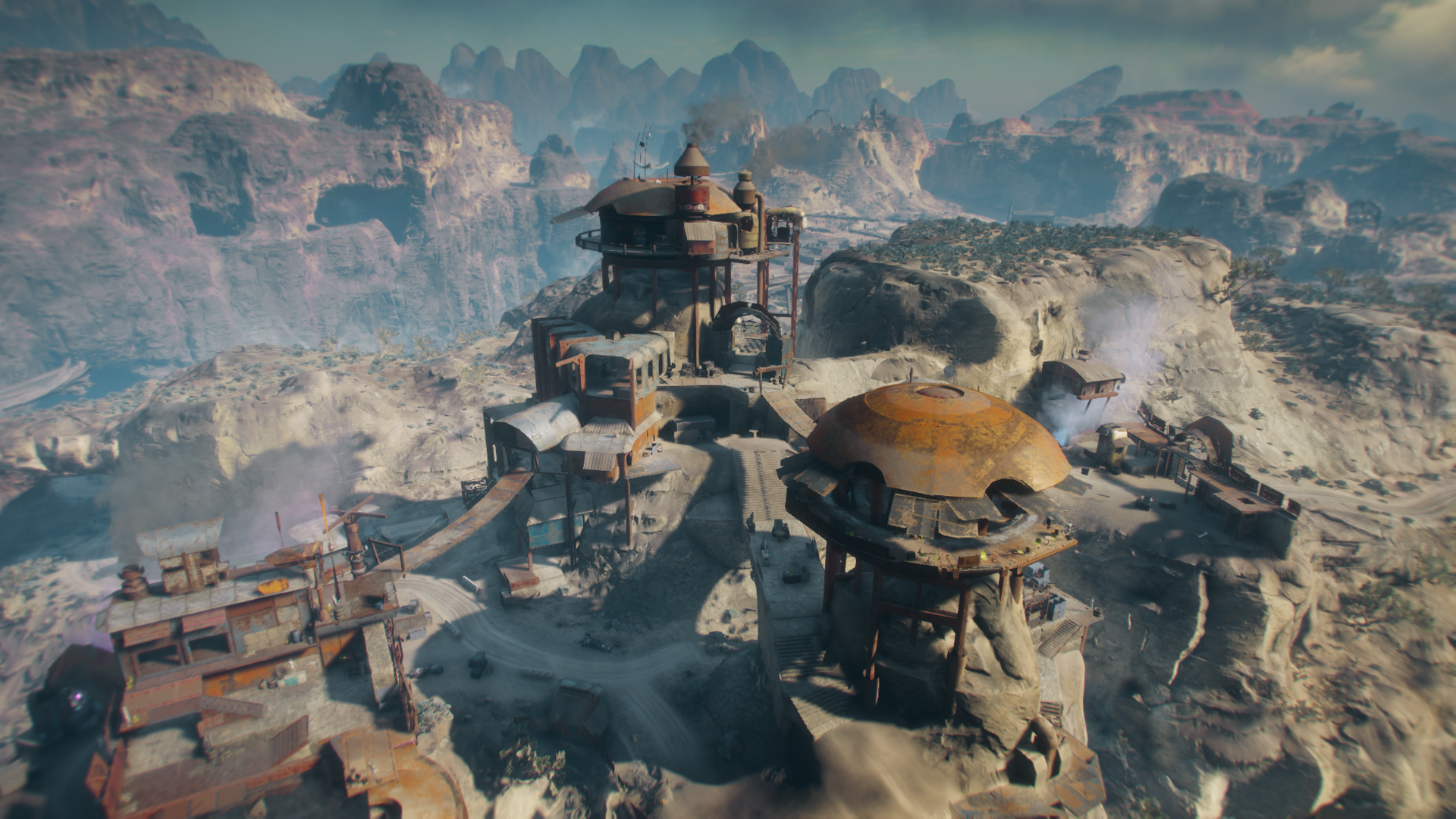 This camp was loads of fun to clear out, what with all its verticality and precarious ledges, it now will forever remain an empty shell with no reason to ever return.

The vehicles are not much to write home about either. I was initially impressed by the long list of vehicles I could add to my garage, but had my excitement doused by the discovery that only one, the starting vehicle, was upgradable, and indeed really the only one worth driving. The tanks pack a punch, the faster vehicles are neat for getting around and the Icarus "helicopter" is the best vehicle for getting from A to B with no hassle, but the only one rounded enough to actually be useful in most situations is the Phoenix, and it's not great. Even fully upgraded I found the handling unpleasant, the combat frustrating and the camera headache inducing. With a few tweaks and fleshing out I think that the whole vehicle system could have been made into a really compelling cornerstone of the game, which also works thematically, but as it stands it's just an underwhelming tack-on for getting around.

I've also seen complaints about the story. Personally, I didn't pick up this game for the story and was not left feeling like it was terrible nor brilliant, but it certainly is short. There are three NPCs who give you two quests each, the second being unlocked by getting "points" for them, collected by completing locations on the map (something I was able to do naturally by picking off a few on my way between story missions). Each one is a linear set-piece kind of level with a bit of talking and nebulous plot happening as you go through, which eventually results in you gathering all you need to assault the enemy stronghold. After that… that's it, the game is over and you're back into the open world with, apparently, "plenty more that needs doing."

But there really isn't. The game doesn't have sidequests, just bounties which can be picked up from hub towns, which randomly plop some enemies on the map and have you kill them. Even stretching out the story by trying to get most of the open world locations wrapped up and my character upgraded, it still only took me five days of light gameplay to complete. In less than two weeks I completed every single location on the map and unlocked all the Steam achievements. The game has nothing left to offer me. 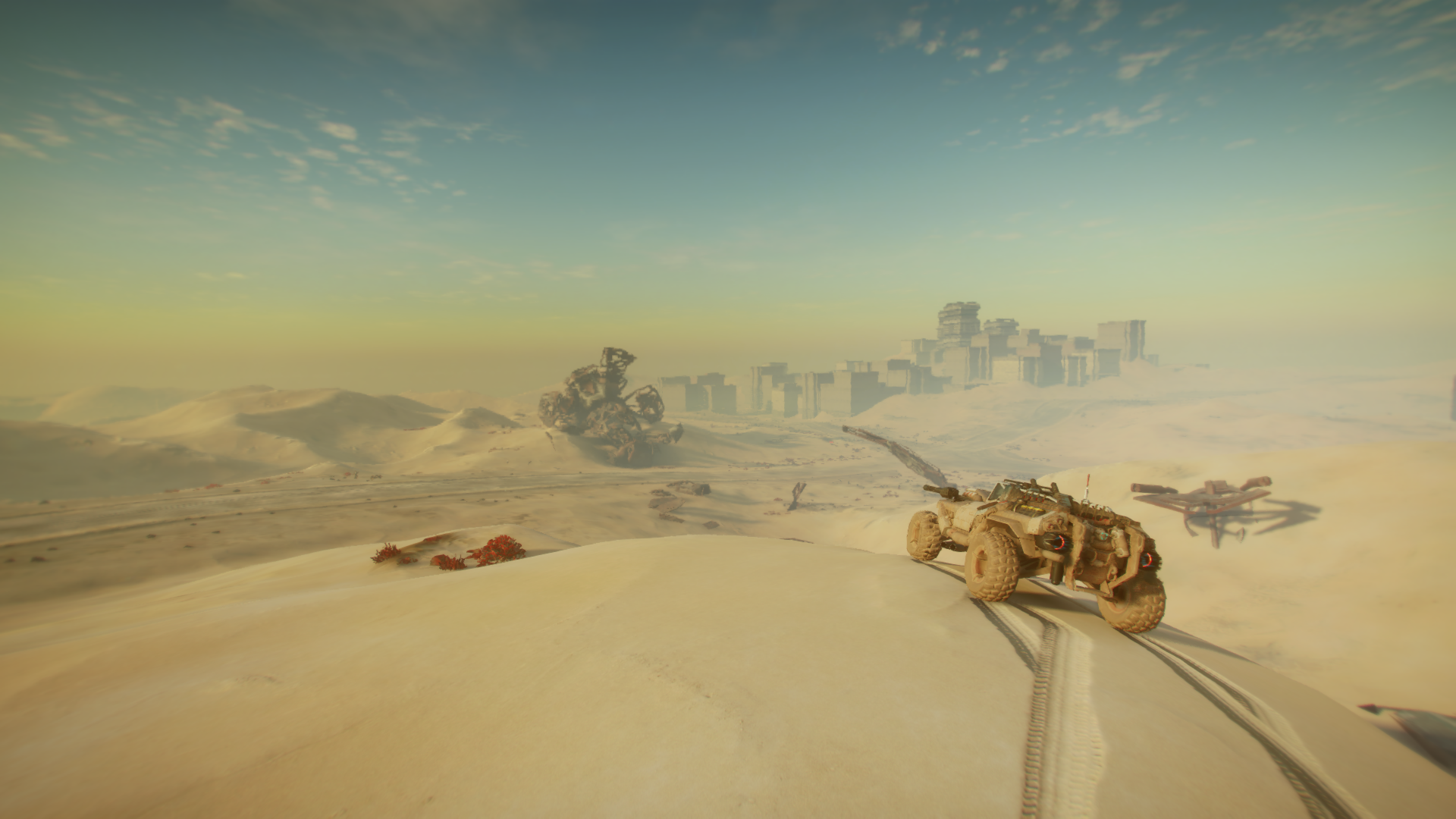 The Ranger surveys an empty desert, with only a few randomly occurring pockets of life left, which I suppose I'm expected to spend the rest of my days killing...

I feel I've been quite rude in this entry. I hugely respect video game developers and artists and designers and I think they do wonderful, world-changing work for very little recognition, until things go wrong and they are scapegoated by everyone. But I am still very disappointed to have to say that RAGE 2 felt like it was built with no passion. An attempt was made, likely stemming from some great ideas - as can be seen in the creativity of the art and the lore - but the final product feels dead inside.

Just like Mad Max, RAGE 2 feels like it's on the cusp of greatness, but just didn't quite have the steam to get it out of the ditch of mediocrity. With some more to do in the world (and a reason to do it), tweaked vehicle gameplay and just a little more heart, RAGE 2 would have kept me entertained for hours. But as it is, after only eleven days I have no reason to ever pick it up again. I really hope that Avalanche do something interesting with this game in the future, such as some extra story DLC or a new region to explore, because I think the skeletal structure of the game - the core mechanics - are well built and oozing with potential which just needs to be unlocked.

But until then, goodbye RAGE 2.